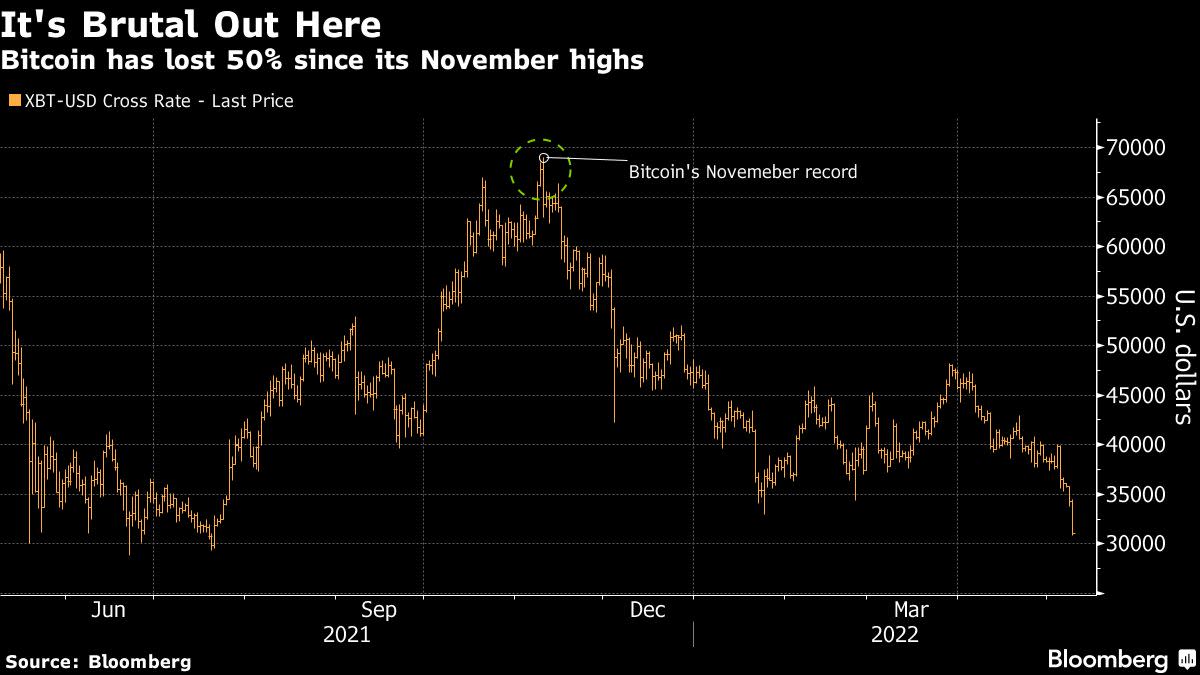 (Bloomberg) — There’s a crypto refrain when prices crash precipitously like this: The selloff is washing out the short term-focused non-believers, known as weak hands, strengthening the industry in its wake.

It’s a glib way to think of all those who had joined the market as Bitcoin’s price rose to an all-time high at the end of last year — including institutions and small-time at-home investors, many of whom are deeply underwater on their investments now.

A measure called MVRV — which divides market value by the average purchase price — shows that short-term holders, on average, purchased Bitcoin at around $47,500. Another gauge, called the spent-output-profit ratio (SOPR), indicates those kind of investors are selling at a loss right now, according to an analysis by Genesis Global that uses Glassnode data.

And it’s not just those who have held the coin for a few months. More than half of traders who had gotten held crypto at the end of 2021 in that year, crypto firm Grayscale Investments said at the time. Bitcoin’s average price in 2021 hovered around $47,300. It was near $32,000 on Monday in New York trading.

“Absolutely a ton of people are down,” said Stephane Ouellette, chief executive of FRNT Financial Inc. “Anyone who bought BTC for the first time in 2021 is down.”

Crypto fans have long argued that digital assets would hold up well during turbulent times. Many had said Bitcoin would prove to be a good inflation hedge thanks to its limited supply. It was also supposed to hold up better amid economic and geopolitical crises because it’s not tied to any government and has no centralized authority.

Instead, digital-asset investors are suffering through an environment that’s put a lot of risky assets through the wringer this year. The Federal Reserve and other central banks are raising interest rates to combat inflation just as the economic backdrop is softening. In this environment, Bitcoin, the largest digital asset by market value, has been cut in half since its November record. It’s seen five straight weeks of declines and just one positive day out of the last 11 sessions, including Monday’s.

“Cryptocurrencies are risk assets,” said David Spika, president and chief investment officer of GuideStone Capital Management. “’This should be a good inflation hedge.’ Wrong. It is a speculative asset that is not going to perform well in an environment like this.”

During its downfall, Bitcoin has largely moved in tandem with other riskier assets, analysts have noted. Its correlation to tech stocks has been particularly pronounced, with both the coin and the Nasdaq 100 reaching highs in November. The 90-day correlation coefficient of Bitcoin and the tech gauge now stands above 0.68, the highest such reading in Bloomberg data going back to 2010. A coefficient of 1 means the assets are moving in lockstep, while minus-1 would show they’re moving in opposite directions.

“Anyone who bought tech stocks over the past year is underwater, too, and I group them together,” said Peter Boockvar, chief investment officer at Bleakley Advisory Group.

To be sure, short-term investors aren’t all necessarily retail — a lot of institutional players also started to dabble in crypto in recent years. Still, the crypto craze had caught the eye of a lot of at-home traders who had been stuck at home during the pandemic and who deployed money into a market that went up in 2020 and 2021.

In addition, the average purchase price is just that — an average — meaning that Bitcoin reaching that level again doesn’t necessitate all those investors break even once more, said Noelle Acheson, head of market insights at Genesis. “It’s likely that more will be, since short-term holders are more prone to panic-selling, and so the average purchase price is likely to drop fast,” she said.

As to what it would take for Bitcoin to reclaim its old highs is anyones guess. In the meantime, many are projecting that the coin, and other cryptos, will come out on the other end stronger. The shakeout will leave behind long-term HODLers who aren’t scared enough to offload their holdings. Famed investor Marc Cuban thew in his two cents, tweeting that crypto is going through the same lull the early internet went through.

Still, the Fed is dead-set on bringing inflation down through a series of interest-rate hikes, and Bitcoin, and other riskier assets, could meander along all year in this tighter-monetary-policy environment.

“Bitcoin is under tremendous sell pressure,” said Steven McClurg, CIO at Valkyrie Investments. “Barring an extraordinary event, it wouldn’t surprise me for us touch $25,000 before we start to see some form of stability. That said, we are more likely to see sideways trading through to the fourth quarter than we are to see a rally carry us through the summer.”