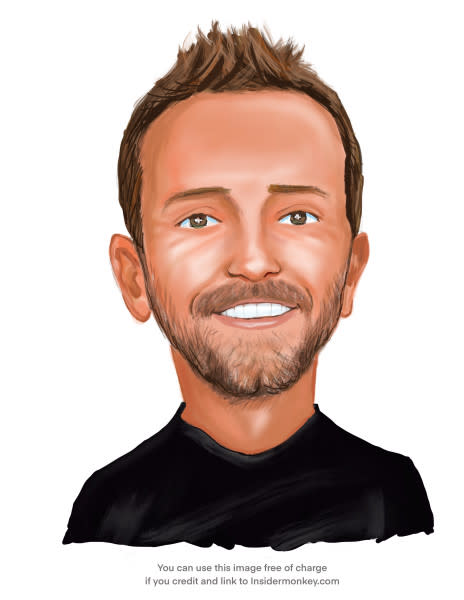 Brad Gerstner is known in finance circles as the chief of Altimeter Capital Management and an IPO guru. Over the course of his career in finance, Gerstner has participated in more than 100 initial public offerings as an investor, sponsor, or anchor. Even though Gerstner manages an equity portfolio of over $3.6 billion at his hedge fund, having founded the fund in only 2008, he comes from a much humble background, having to pay for law school when he was young through day-trading. His fund managed over $18 billion in assets as of April 2022.

Altimeter Capital Management focuses on growth stocks that have come under increased pressure in recent days as interest rates rise and lead to a broad correction in the market. Gerstner addressed some of the concerns around his portfolio and his bullish stance on companies like Alphabet Inc. (NASDAQ:GOOG), Microsoft Corporation (NASDAQ:MSFT), and Amazon.com, Inc. (NASDAQ:AMZN) during an interview on CNBC on May 3 in which he discussed his broader economic outlook as well.

When asked about why he had sold off many stocks that he and Cathie Wood, another famous growth investor whose portfolio has nosedived in recent weeks, had in common, Gerstner referred to his recent activities as “lightening the load”. The hedge fund manager claimed that as the market pulled in on the risk curb, the first names that would be penalized in the growth sector were some of the stocks that Wood owned. He even underlined how some of the stocks he had sold were now down 70%, 80%, or even 90% in some cases.

However, Gerstner cautioned that he was not advocating that these growth firms were simply uninvestable, but rather asserting that there was no need to “go that far out on the risk curve to get really terrific returns for yourself and your investors”. He also said that for the bulls, it was all about their “appetite for risk” in the present market situation. Gerstner highlighted that his fund had consolidated in the past few months behind the “best ideas” because he was not sure if the market would have the appetite to invest in the next few weeks.

Brad Gerstner also talked about inflation during his interview, noting that it would probably take close to two years for the market to work through the inflation and rate concern. He also underscored the importance of buying during this period, saying that during this period of time, if investors wanted to ride the volatility at the market, it was important to know that they were in a business that was going to be “worth more in the future” as the fundamentals remained strong, pointing to his hedge fund activity as an example.

Answering another question about Wood, Gerstner noted that he considered her fund to be composed of “the highest-risk components of the growth sector” and he was not sure if the world was going to return “to that level of speculation”. The hedge fund manager stressed that it was not wise to anchor oneself to prices that the “most risky companies” were trading at last year since the central bank, by raising the interest rates, had forced the whole market out on the risk curve. He claimed that owning “quality companies” was the best in the present situation.

Brad Gerstner talked about these stocks in an interview that he gave to news platform CNBC on May 3. The companies in which his hedge fund has a direct stake are also included in the list. An extensive database of around 900 elite hedge funds tracked by Insider Monkey was used to identify the popularity of each stock among hedge funds.

Brad Gerstner is Talking About These Stocks

Roblox Corporation (NYSE:RBLX) owns and runs an online entertainment platform. The company has featured in the Gerstner portfolio since the first quarter of 2021. The holding comprised over 2.8 million shares at the end of the fourth quarter of 2021 worth $294 million, representing 2.8% of the portfolio. Gerstner is bullish on the stock and has previously said that he expects over 1 billion people to use the Roblox platform at some time in the future. Per Gerstner, gaming was transforming from just a “hit business” into something more immersive.

On April 7, Citi analyst Jason Bazinet initiated coverage of Roblox Corporation (NYSE:RBLX) stock with a Buy rating and a price target of $59, noting that the company boasted a “unique two-sided gaming platform with positive free cash flow and a relatively lean capital structure”.

At the end of the fourth quarter of 2021, 61 hedge funds in the database of Insider Monkey held stakes worth $4 billion in Roblox Corporation (NYSE:RBLX), up from 50 in the previous quarter worth $3.5 billion.

In its Q4 2021 investor letter, Tao Value, an asset management firm, highlighted a few stocks and Roblox Corporation (NYSE:RBLX) was one of them. Here is what the fund said:

“Roblox Corporation (NYSE:RBLX) got significant more attention from both institutional & retail investors after Facebook announced to rename itself as Meta Platforms. I believe the price appreciation is largely attributed to the increased attention. On business side, Roblox Corporation (NYSE:RBLX) rolled out a few successful music events and also partnered with Netflix on testing long-form media consumption in virtual world. Apple in its iOS 14.5 rolled out an impactful change for digital advertising landscape by requiring all apps to ask users to “opt in”.

Unity Software Inc. (NYSE:U) operates a real-time content creation platform. The stock was the sixth-largest holding of Altimeter Capital Management at the end of the fourth quarter of 2021, consisting of over 2 million shares worth $300 million, representing 2.85% of the portfolio. The company has featured in the Gerstner portfolio since the third quarter of 2020.

On April 7, Citi analyst Jason Bazinet initiated coverage of Unity Software Inc. (NYSE:U) stock with a Buy rating and a price target of $125, identifying the software engine and a leading position in the mobile gaming market as growth catalysts for the stock.

At the end of the fourth quarter of 2021, 36 hedge funds in the database of Insider Monkey held stakes worth $7.4 billion in Unity Software Inc. (NYSE:U), the same as in the preceding quarter worth $7.9 billion.

Snowflake Inc. (NYSE:SNOW) owns and runs a cloud-based data platform. The stock is the largest holding in the Altimeter Capital Management portfolio. At the end of December 2021, the fund owned over 17 million shares in the company worth more than $5 billion, representing over 54% of the portfolio. Between October and December, the fund reduced its stake in the firm by 20% compared to third quarter filings. The firm has been in the portfolio consistently since the third quarter of 2020.

On April 25, Wolfe Research analyst Alex Zukin initiated coverage of Snowflake Inc. (NYSE:SNOW) stock with an Outperform rating and a price target of $250, noting that the company had potential to become the “4th hyper-scaler”.

Among the hedge funds being tracked by Insider Monkey, Boston-based investment firm Altimeter Capital Management is a leading shareholder in Snowflake Inc. (NYSE:SNOW) with 17 million shares worth more than $5.7 billion.

Here is what Baron Funds has to say about Snowflake Inc. (NYSE:SNOW) in its Q1 2022 investor letter:

“Snowflake Inc. (NYSE:SNOW) grew revenues…106% (to $1.2 billion — while new bookings in the fourth quarter alone were $1.2 billion in contract value) with 12% margins. The stock was down 32% in the first quarter. We believe that these companies, along with many others that we own, are the long-term beneficiaries of digital transformation, a multi-decade paradigm shift sweeping global economies today. Frank Slootman, Snowflake’s CEO, explained it this way in his most recent earnings call with investors..” (Click here to read full text)

Netflix, Inc. (NASDAQ:NFLX) provides entertainment services. Gerstner discussed the stock during his interview with CNBC on May 3, not agreeing with the assertion put forth by the interviewer that FANG stocks, a basket of high-growth stocks that include Netflix, were “dead”. The hedge fund manager claimed that the internet sector in general had posted remarkable earnings and was growing at a rapid pace. He highlighted the enterprise shift to the cloud as one of the main drivers of this growth.

On April 21, Citi analyst Jason Bazinet kept a Buy rating on Netflix, Inc. (NASDAQ:NFLX) stock but lowered the price target to $295 from $450, underlining that “much of the downside risk is priced into the equity” following disappointing first quarter results.

Among the hedge funds being tracked by Insider Monkey, Chicago-based firm Citadel Investment Group is a leading shareholder in Netflix, Inc. (NASDAQ:NFLX) with 4.1 million shares worth more than $2.4 billion.

In its Q4 2021 investor letter, ClearBridge Investments, an asset management firm, highlighted a few stocks and Netflix, Inc. (NASDAQ:NFLX) was one of them. Here is what the fund said:

“We were quite active during the quarter, leveraging volatility to add 10 new names to the portfolio while exiting seven others. Among our new purchases was Netflix in the communication services sector. Netflix, Inc. (NASDAQ:NFLX) is the global leader in the production and distribution of streaming entertainment, operating a high-quality subscription business with room for continued growth in a large addressable market. The stock has faced headwinds due to concerns around subscriber growth. We attribute this recent weakness to COVID-related production delays that have slowed the pace of new shows premiering on the platform and believe Netflix, Inc. (NASDAQ:NFLX) has a strategic advantage in scaling its business given its large content library and lead versus peers in establishing local content studios and partnerships.”

On May 3, Morgan Stanley analyst Katy Huberty maintained an Overweight rating on Apple Inc. (NASDAQ:AAPL) stock with a price target of $195, noting that the revenue growth for the App Store of the company had accelerated in April.

At the end of the fourth quarter of 2021, 134 hedge funds in the database of Insider Monkey held stakes worth $186 billion in Apple Inc. (NASDAQ:AAPL), up from 120 in the previous quarter worth $146 billion.

In addition to Alphabet Inc. (NASDAQ:GOOG), Microsoft Corporation (NASDAQ:MSFT), and Amazon.com, Inc. (NASDAQ:AMZN), Apple Inc. (NASDAQ:AAPL) is one of the growth stocks on the radar of hedge funds as inflation soars.

In its Q4 2021 investor letter, Berkshire Hathaway highlighted a few stocks and Apple Inc. (NASDAQ:AAPL) was one of them. Here is what the fund said:

“Apple Inc. (NASDAQ:AAPL) – our runner-up Giant as measured by its yearend market value – is a different sort of holding. Here, our ownership is a mere 5.55%, up from 5.39% a year earlier. That increase sounds like small potatoes. But consider that each 0.1% of Apple’s 2021 earnings amounted to $100 million. We spent no Berkshire funds to gain our accretion. Apple’s repurchases did the job. It’s important to understand that only dividends from Apple are counted in the GAAP earnings Berkshire reports – and last year, Apple paid us $785 million of those. Yet our “share” of Apple’s earnings amounted to a staggering $5.6 billion. Much of what the company retained was used to repurchase Apple Inc. (NASDAQ:AAPL) shares, an act we applaud. Tim Cook, Apple’s brilliant CEO, quite properly regards users of Apple Inc. (NASDAQ:AAPL) products as his first love, but all of his other constituencies benefit from Tim’s managerial touch as well.”

Click to continue reading and see Brad Gerstner is Talking About These 5 Stocks.

Disclosure. None. Brad Gerstner is Talking About These 10 Stocks is originally published on Insider Monkey.