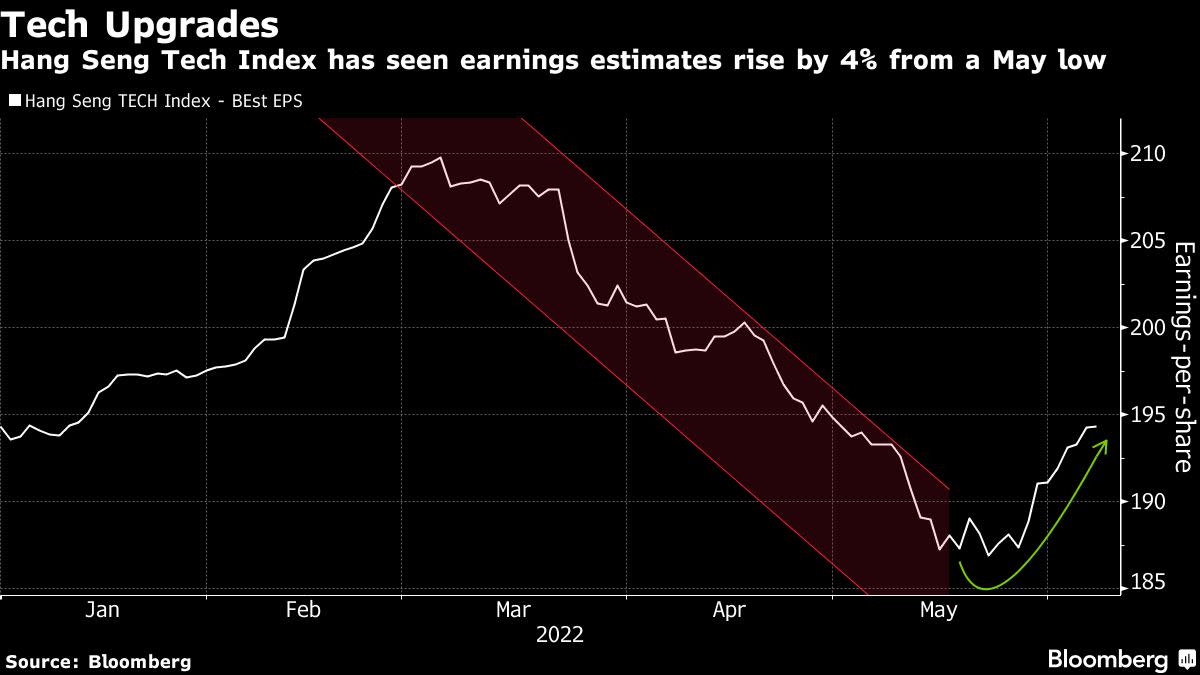 (Bloomberg) — A slew of China video game approvals is giving stock bulls renewed hope that a nascent rebound in tech shares could become a sustainable rally.

The Hang Seng Tech Index jumped more than 4% Wednesday after the government approved 60 licenses, bolstering bets that a year-long crackdown that wiped out $2 trillion in market value from the sector was nearing its end. The gauge pushed further away from its recent downtrend and climbed above a key moving average for the first time in 15 months.

The gaming approvals come on the heels of a report this week that China is wrapping up its investigation into Didi Global Inc. — a major flashpoint in Beijing’s move to curb the power and influence of the nation’s largest companies. To some investors that suggests a marked turnaround in a sector that until recently had been considered uninvestable.

Alibaba Group Holding Ltd. and Bilibili Inc. led the rally, surging by as much as 11% and 19% respectively. The buying frenzy also lifted shares of Tencent Holdings Ltd. and NetEase Inc., despite the companies being absent from the approval list.

“I think the market is still excited about the potential restore of Didi on Apps stores and feels a bit risk-on sentiment,” said Willer Chen, an analyst at Forsyth Barr Asia Ltd. “The newest batch of gaming license approval, though Tencent and NetEase are not on the list, is also good news.”

China Approves More Games in a Step Toward Normalization

From the sudden scuttling of Ant Group’s IPO in late 2020 to sweeping reforms for online tutoring firms last summer to a shake up of Macau casinos, Beijing’s hallmark crackdown on the private sector has forced a rethink of not just where but whether investors should put their money in the world’s second largest economy.

Reforms have landed most heavily on tech companies, with nearly $2 trillion of market value wiped out since a 2021 peak. While the Hang Seng Tech gauge has risen almost 40% from its mid-March low, it remains more than 50% below its 2021 high.

The outlook looks a bit different this time around. Forward earnings estimates for companies on the sector benchmark have risen by about 4% from a low in May after slumping nearly 11% from a peak in March, according to data compiled by Bloomberg.

Still, investors will remember that a March promise from China’s top economic official — Vice Premier Liu He — that a sweeping crackdown on internet companies was nearing an end, failed to keep markets higher for long. And much will depend on the path of the economy, with China’s strict Covid Zero policy leaving the specter of future lockdowns hanging.

“When the economy is struggling, the tightenings will take a break and the policy will become more pro-growth,” Winnie Wu, China equity strategist at BofA Securities, said in a Bloomberg TV interview. “So during those times we could see a strong trading rally of the internet sector in general, because they remain to be some of the largest, most liquid stocks that investors are familiar with.”