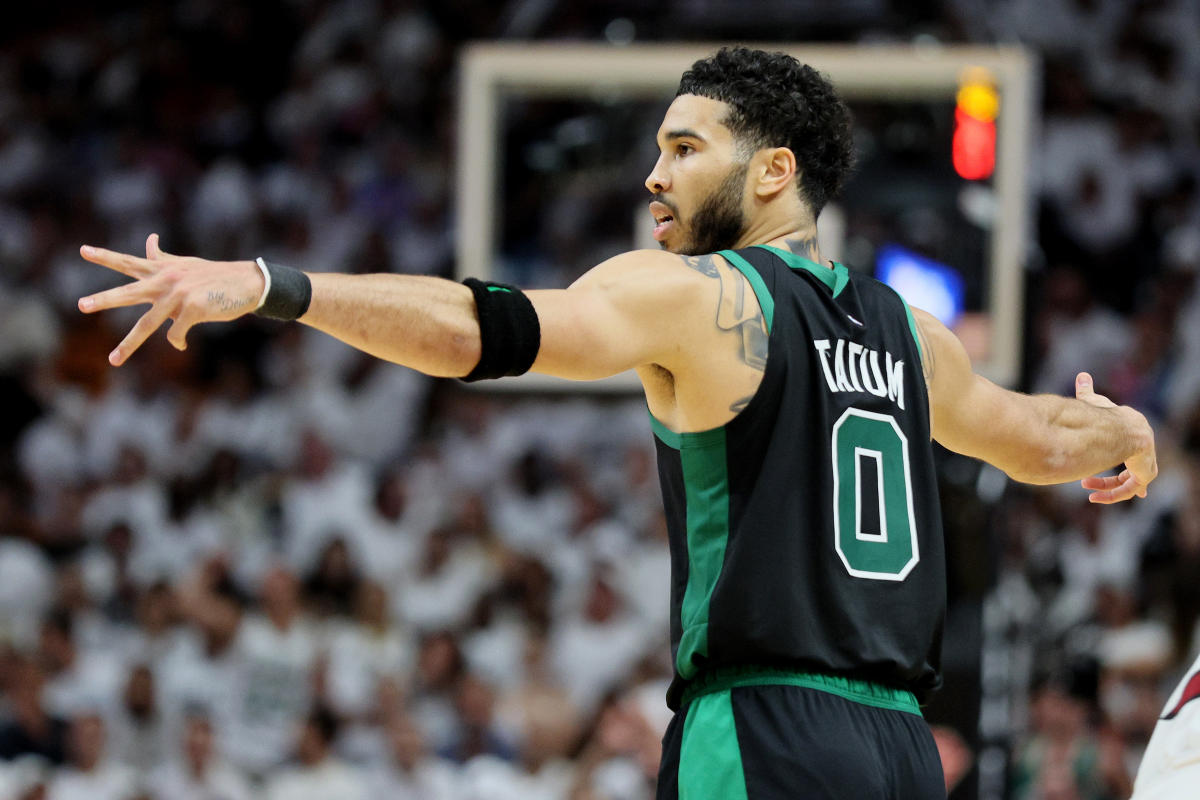 It wasn’t pretty, but the Boston Celtics took the Eastern Conference finals lead for the first time, and the Miami Heat are facing elimination in a road Game 6 less than 48 hours after yet another battle of attrition.

Neither team could find the net in the first half, but the Celtics unleashed a 24-2 run over six minutes spanning the end of the first quarter and the start of the fourth. The avalanche turned the first back-and-forth game of the series into a fifth straight lopsided victory. Boston’s top-rated defense hero Miami to 32% shooting from the field and 16% accuracy from 3-point range in the 93-80 win that titled a tied series.

Celtics stars Jayson Tatum and Jaylen Brown combined for 10 points on 16 shots in the first half, but they made all five of their attempts to start the fourth quarter, including four 3-pointers, to extend their lead to 83-60. Brown scored a game-high 25 points, and Tatum finished one assist shy of a triple-double (22 points, 12 rebounds, nine assists) to lead Boston within a game of its first Finals appearance since 2010.

“We’re just playing basketball,” Brown told the ESPN broadcast after the victory. “It’s the playoffs. One game, you win. The next game, [Jimmy Butler] can come out and score 40 points, so we’ve just got to be great from game to game. This game only counts as one. We’ve got to be ready for the next one.”

The Celtics, who are 40-4 in franchise history when leading a series 3-2, host Game 6 on Friday. Boston fans will remember 2012, when the Celtics took a 3-2 conference finals lead home and lost to the Heat.

Both teams shot below 40% from the field and worse from the 3-point line in the first half. Miami scored 12 points off 10 Boston turnovers and 16 points on nine offensive rebounds — and only led 42-37 at the break. It was ugly. On the bright side, the series saw its first lead changes since the opening quarter of Game 2.

Injuries did not help. Marcus Smart limped into the arena on a sprained ankle. Robert Williams III started on a surgically repaired knee. Tatum twice re-aggravated his shooting shoulder. Butler is nursing a swollen right knee and Kyle Lowry a strained left hamstring. Tyler Herro never saw the court on an injured groin.

Butler, Lowry and Max Strus, who was also questionable with a hamstring injury entering the game and limped to the bench during it, finished 4 for 33 from the field. They are 8 for 60 (13%) in the last two games.

“We’re not making excuses for anything,” Heat coach Erik Spoelstra said after a second straight blowout loss. “We’re not deflecting anything. We’re not making excuses for it. We lost the game today. We had a tough loss in Boston. We’re still alive. We have an opportunity to play in front of a great crowd [in a potential Game 7 on Sunday] and an opportunity to make a memory that you’ll remember for a long time. That’s all we’re thinking about right now, and we have the type of warriors who are going to tape up, brace up, do whatever we’ve got to do to get ready for the next one and just embrace and enjoy that competition. “

The Celtics started the third quarter on a 8-0 run and closed it on a 10-0 run to double up the Heat and take a 69-58 lead into the fourth quarter. Miami missed 19 of their 23 field-goal attempts and 13 of their 14 3-point shots in the third. The Heat could manufacture nothing beyond a couple tough Gabe Vincent jump shots. Reserves Vincent, Duncan Robinson and Caleb Martin scored 33 of Miami’s 80 points on the night.

Boston extended its lead to 23 early in the fourth quarter. Bam Adebayo responded with eight straight points for Miami, and a Vincent 3-pointer capped a 16-6 run that cut the deficit to 13 with 4:18 remaining. Adebayo (18 points) and Vincent (15 points) were 14 for 27 from the field. Their teammates were 16 for 67.

The Heat could get no closer, as four more points from Brown and Tatum left nothing but garbage time.

is a staff writer for Yahoo Sports. Have a tip? Email him at or follow him on Twitter!