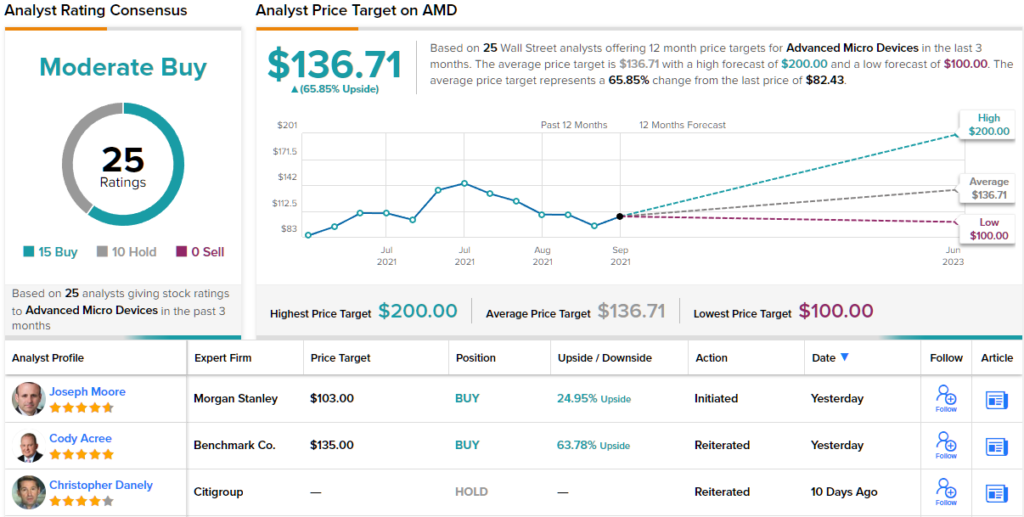 With the seemingly endless selection of headwinds plaguing 2022, this year is panning out like no other in recent times. Just ask investors in Advanced Micro Devices (AMD†† After making a habit of consistently outperforming the market, AMD shares have been on the backfoot in 2022 (down 43%) – a highly irregular occurrence.

Yet, according to Morgan Stanley’s Joseph Moore, despite the macro uncertainty, it is now time investors cotton on to the opportunity following the stock’s decline.

“While the demand picture across all of the end markets is mixed given the plateauing economy, we think that the stock has over-corrected – we see share gains and mix improvement allowing them to power through more than most with double digit growth next year, and with the stock down over 48% from its 4Q21 highs, we see the risks as largely priced in,” Moore said.

That’s not to say there aren’t any valid concerns regarding the economy’s downturn and the implications on AMD’s business – particularly on the consumer side, which Moore thinks is likely the main culprit behind the share price weakness.

And with PC processors, graphics, and consoles accounting for 55% of revenues, the analyst is expecting a “meaningful correction” in PC over the next few quarters. That said, even with the concerns around the consumer-linked end-markets, Moore believes AMD is not as exposed compared to other major competitors.

And providing a counterpoint, with data center plus Xilinx products now representing around 50% of gross profit dollars, and both boasting “strong share gain potential,” over the next 2-3 years, Moore thinks that figure could move up to around 65% -70%. As such, even though the analyst is cautious on the general state of semiconductors, AMD’s “strength in server” should enable it to keep showing “solid growth at a now-reasonable valuation.”

To this end, Moore resumed coverage of AMD stock with an Overweight (ie, Buy) rating and a $103 price target. Should that figure be reached, investors are looking at 12-month gains of 25%. (To watch Moore’s track record, click here†

Amongst Moore’s colleagues, AMD’s ratings are mixed, although the bulls remain in charge; based on 15 Buys vs. 10 Holds, the stock claims a Moderate Buy consensus rating. The average price target is more bullish than Moore will allow; at $136.71, the figure represents one-year upside of ~66%. (See AMD stock forecast on TipRanks)

Disclaimer: The opinions expressed in this article are solely those of the featured analyst. The content is intended to be used for informational purposes only. It is very important to do your own analysis before making any investment.