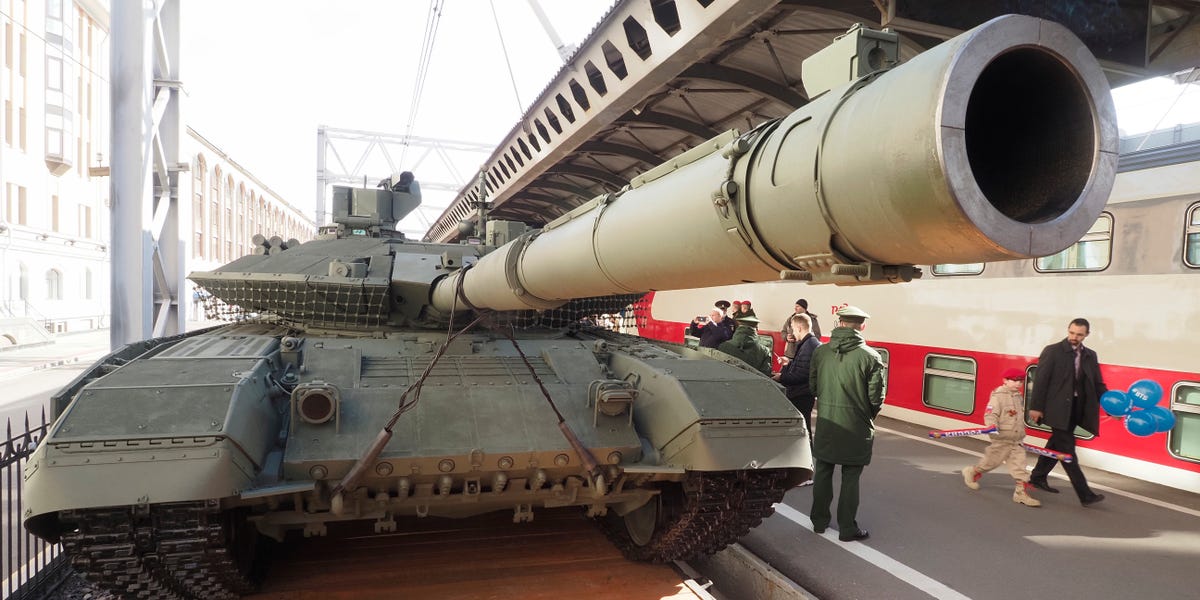 Russia faced yet another military setback this week following reports that one of the country’s most advanced tanks in service, the T-90M, was destroyed just days after it was deployed to Ukraine.

Ukrainian journalist Andriy Tsaplienko first posted a picture of the charred vehicle on Wednesday from the Kharkiv region, which he said was recently liberated by Ukrainian forces.

Tsaplienko shared a photo of himself standing in front of the ruined tank, jokingly telling his followers that the destroyed vehicle is “hot, it’s smokin’ hot.”

The journalist said Russian troops on Wednesday attempted to reclaim the territory but failed to make headway. Tsaplienko reported that the scraps of Russia’s destroyed tank will be displayed in an upcoming May 9 parade commemorating the end of World War II.

The Ministry of Defense of Ukraine confirmed the T-90’s destruction in a Thursday statement, saying the battle vehicle nicknamed the “Breakthrough” had arrived in Ukraine just one week prior to its demise.

“Thus, the image of the Russian army, which many in the world feared, has degraded and fallen over the past two months to such an extent that few could have imagined it,” the statement said.

According to Newsweek, the machine’s presence in eastern Ukraine was first reported on Apr 25.

The Defense Ministry said the tank was hit by Ukrainian forces with an American Javelin anti-tank missile system near Izyum. The agency reported that an MT-LB armored personnel carrier and an infantry fighting vehicle were also destroyed in the attack.

In its statement, the Defense Ministry said the missile system “turned a super-modern Russian tank into a pile of scrap metal.”

The T-90M tank, which is one of the newest additions to Russia’s T-90 series, is the most technologically advanced battle vehicle within Russia’s frontline arsenal, according to The Drive, and was first issued to Russian military divisions in the spring of 2020 The outlet estimated that only about 100 models are currently in service.

Russia’s T-14 Armeta is newer than the T-90M, but still in production.

The Ukrainian Defense Ministry said the T-90M is equipped with a powerful engine, panoramic sight with rangefinder, a thermal internal imaging channel, and a fire control system. The new design also features multi-layered armor and ammunition placed outside the unit, according to the ministry. Multi-channel sight in the tank allows it to fire at all times of the day.

“All these upgrades do not seem to have helped the T-90M, which is already seen as the first confirmed loss of a tank of this type in Ukraine,” the Defense Ministry said in its statement.

Last month, Russia suffered another embarrassment after its Black Sea flagship “Moskva” sunk after being hit by a Ukrainian missile.