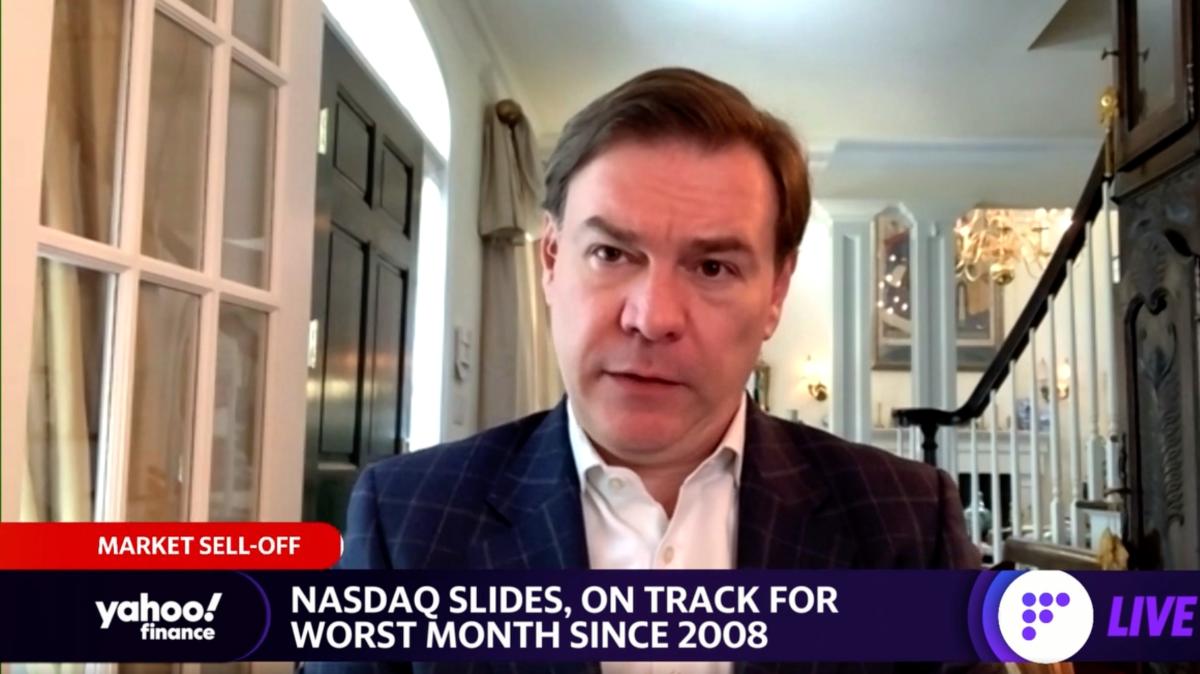 † –markets reacting to today at the end of this very tumultuous week?

STEVEN WIETING: Well, I’m not sure it’s a really new factor other than the specific equities that posted earnings growing less than everyone might hope and what we’ve gotten used to. It’s really the valuation crush that we’ve had with double-digit losses in the bond market on the year-to-date and the Federal Reserve beginning a tightening cycle into a supply shock.

So we’ve taken our US growth forecast for this year from 3.5% down to 1.9%. We think that growth next year will be slow as well. And it requires the Federal Reserve to recognize that we are on the way to a slower inflation rate. And they can’t be on the way to multiple years of policy tightening.

So that’s the ugly picture that we have to get into the markets. Again, again, how it feels at the moment, what today will tell you about long-term investing can be very different. But just as an example, again, including a lot of hedges in our portfolios, inflation hedges with natural resources firms. And we’re overweight long-duration US government bonds for the first time since bond yields bottomed in 2020.

† And so Steven, when we think about what the Fed has said so far and their targets for when inflation might peak, there are some economists that have already suspected that inflation has peaked. Do you believe the same? Or if not, when do you believe it will?

STEVEN WIETING: no. I think inflation has likely peaked with an 8.5% CPI reading. I think we’ll see a slightly lower reading in April already. But whether that’s sufficient– again, the speed at which we see inflation drop is actually not under the Federal Reserve’s control. And we see a lot of, again, downward inertia. We have to remember that inflation is a lagging indicator.

STEVEN WIETING: –is a member of the index of lagging economic indicators. And Fed Chairman Powell was reminding us just a year ago that Fed tightening can impact inflation with a full year lag.

Well, when they tell you that we’ve got to knock the inflation rate down to target and you’ve had this shock, this extraordinary shock which has extended the previous one from what’s going on with insufficient commodity supplies, with what’s going on in Russia, Ukraine, for example, and just the bottlenecks of a highly tumultuous period, how are we going to get that inflation rate down fast?

Now presumably, we’re not going to. And we’re going to need the Federal Reserve to recognize that. And I think a lot of the important things have already happened.

This year, federal spending is down 33%. You know, where do we have a discussion of that. So again, the stimulus that was really pushing up demand was very much fiscal in the last two years. That’s been erased. And now it’s a matter of time, again, for us to get enough supply back.

This is both imports, which were surging in the first quarter GDP report as you saw, as well as domestic production coming back. Ideally, it’s not to knock the economy down to this impaired level of supply and to do that quickly.

† We had a very upbeat analysis of the negative 1.4% decline that you’re seeing on your screen right now, of the GDP. That was from the White House yesterday who spun a very different picture than the one, again, that you see.

Were there positive takeaways for you from that? And can the Fed do all those things you just mentioned without a recession?

STEVEN WIETING: Well, it’s more positive than negative 1.4%. Let’s remember that we added 585,000 jobs per month on average in the first quarter. Domestic production is rising to meet demand. That’s how you can do this without a recession.

And we’re not arguing that you should at policy rates stay at 0%. But let’s remember, the Fed was doing QE through last month. And now they’ve told you rapid quantitative tightening. Their words, rapid.

We have priced in in the bond market the types of rate increases that we have seen as being history’s largest, 250 basis points of rate hikes in a one calendar period, plus quantitative tightening, plus fiscal contraction. All of this is starting to add up is to, yes, if you stay on this course and you don’t veer from it, you can have a recession in 2023. And that’s been an increasing probability.

But we decelerated through the quarter. And the second quarter is not going to be a strong demand period. So if we put all of this together, this course that the bond market has been on, just ever more aggressive Fed tightening is one that if we continued on that course, we would be looking at a recession and we’d be looking at equity markets down considerably worse than this.

† So then in this environment, what should investors be thinking in terms of what to rotate into and rotate out of given what we’re going to see from the Fed?

STEVEN WIETING: For most investors, I think it’s important not to think that, well, today is my Clarion call to do something radically different with my portfolio. What kind of defense have you built in to your portfolio already?

Are you balanced between safer fixed income and equities? Do you have what we’ve done with our portfolios, is raise the quality of equities in portfolios as well as fixed income?

Think about this. The most consistent dividend payers in the United States market are down half as much as the S&P. And the S&P is already a quality index. Sounds boring compared to some of the exciting ideas of last year. But health care, for example, is being an industry that’s really not cyclical.

Think about in fixed income portfolios, we are not going to overweight high yield bonds. We’re going to go up in quality and add government securities, long duration treasuries, very defensive assets.

The one cyclical exception– and again, there’s no good news behind this, but it’s really important– is to reallocate capital to natural resources that are lost because of the war in Russia-Ukraine. In this sense, again, having oilfield services firms, having fertilizers, rare earths doing and producing the things that are the factors of production that will be lost because of this conflict, this is one of the areas within cyclicals that are really needed, again , to stem inflation and in some cases to lower the impact of what will be food shortages in the world in the coming year.

† Steve, you mentioned that some of the economic data that we were reviewing, lagging indicators there. But given the fact that we’re in the midst of earnings season, sure, some of the past performance, that is just what it is, looking back at the first quarter.

But is there anything in the outlooks that you would be giving more weight to or paying closer attention to, and from which companies, to get a pulse of the consumer right now?

STEVEN WIETING: There’s some use from quarter past. There certainly some use from forecasts. You know, it’s the combination of the two. There’s a lot of different ingredients.

Some of the consumer firms, how we’re beginning the second quarter is useful. I think is a little bit of a reality check for many of the people who said the consumer is very, very strong. You know, the difference between unit volumes and absolute spending on the part of the consumer matters.

What happens in financials is a leading indicator for many of the Industrial companies. But as we’ve seen in the past, there are many, many times. The companies that are really involved in the economy, the industrial companies that have strong current conditions, it tells you very little about where their earnings will be in the year ahead.

† hmm. Steven Wieting, who is the Citi Global Wealth Investments Chief investment Strategist joining us here this afternoon. We appreciate the time. I hope you have a great weekend as well.