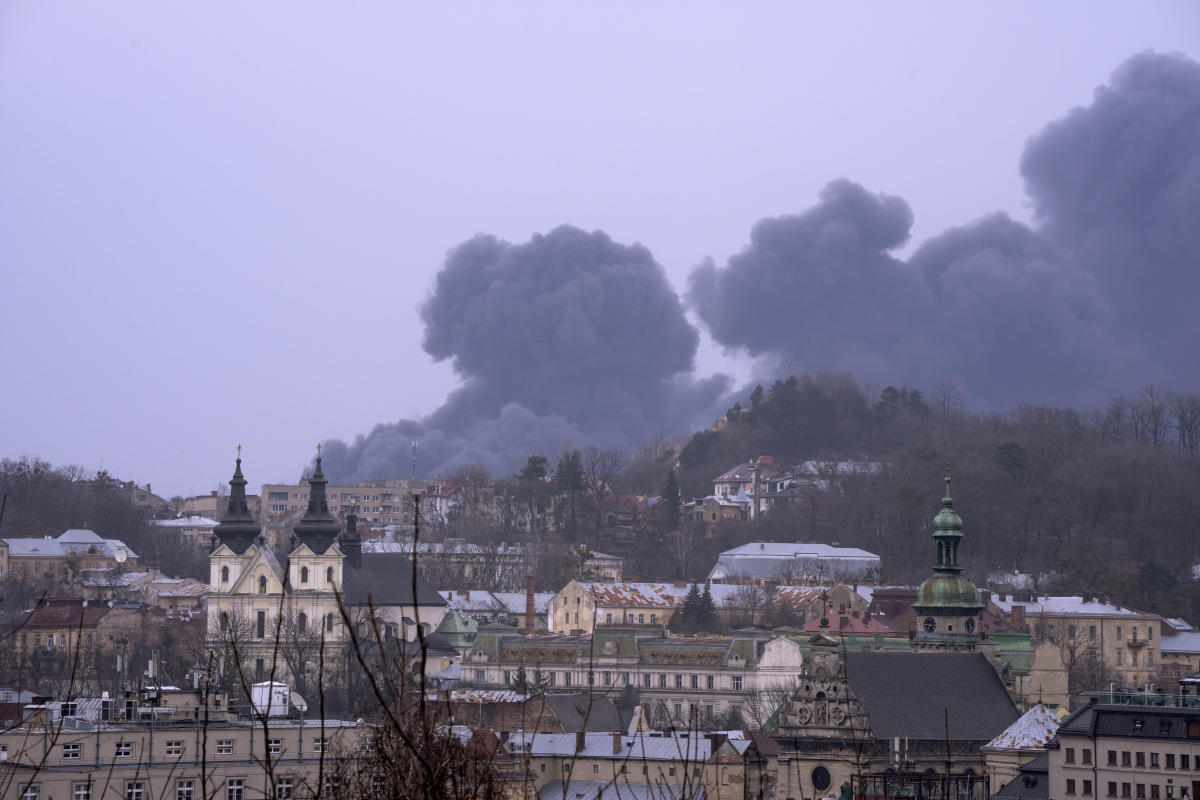 LVIV, Ukraine (AP) — Ukrainian President Volodymyr Zelenskyy accused the West of lacking courage as his country fights to stave off Russia’s invasion, making an exasperated plea for fighter jets and tanks to sustain a defense in a conflict that has ground into a war of attrition.

Speaking after US President Joe Biden said in a lacerating speech that Russian President Vladimir Putin could not stay in power — words the White House immediately sought to downplay — Zelenskyy lashed out at the West’s “ping-pong about who and how should hand over jets” and other weapons while Russian missile attacks kill and trap civilians.

“I’ve talked to the defenders of Mariupol today. I’m in constant contact with them. Their determination, heroism and firmness are astonishing,” Zelenskyy said in a video address early Sunday, referring to the besieged southern city that has suffered some of the war’s greatest deprivations and horrors. “If only those who have been thinking for 31 days on how to hand over dozens of jets and tanks had 1% of their courage.”

Russia’s invasion of Ukraine, now in its 32nd day, has stalled in many areas, its aim to quickly encircle the capital, Kyiv, and force its surrender faltering in the face of staunch Ukrainian resistance — bolstered by weapons from the US and other Western allies .

Britain’s defense ministry said Russia’s troops looked to be trying to encircle Ukrainian forces directly facing the two separatist-held areas in the country’s east. That would cut the bulk of Ukraine’s military off from the rest of the country.

Moscow claims its focus is on wresting from Ukraine the entirety of the eastern Donbas region, which has been partially controlled by Russia-backed separatists since 2014. A high-ranking Russian military official said Friday that troops were being redirected to the east from other parts of the country.

The leader of one of the separatist-controlled areas of Donbas said Sunday that he wants to hold a vote on joining Russia, words that could indicate a shift in Russia’s position. Leonid Pasechnik, the head of the self-proclaimed Luhansk People’s Republic, said it plans to hold a referendum on becoming part of Russia “in the nearest time.”

Russia has supported the separatist rebels in Luhansk and neighboring Donetsk since an insurgency erupted there in 2014, shortly after Moscow annexed the Crimean Peninsula from Ukraine. In talks with Ukraine so far, Moscow has urged Kyiv to acknowledge the independence of Donetsk and Luhansk.

Ukraine says that to defeat Russia, it needs fighter jets and not just the missiles and other defensive weapons supplied so far by the West. A proposal to transfer Polish planes to Ukraine via the United States was scrapped amid NATO concerns about getting drawn into a military conflict with Russia.

In his pointed remarks, Zelenskyy accused Western governments of being “afraid to prevent this tragedy. Afraid to simply make a decision.”

“So, who is in charge of the Euro-Atlantic community? Is it still Moscow, thanks to its scare tactics?” he said: “Our partners must step up their aid to Ukraine.”

His plea was echoed by a priest in the western city of Lviv, which was struck by rockets on Saturday. The aerial assault illustrated that Moscow, despite recent assertions that it intends to shift the war eastward, is willing to strike anywhere in Ukraine.

“When diplomacy doesn’t work, we need military support,” said the Rev. Yuri Vaskiv, who on Sunday reported fewer parishioners than usual in the pews of his Greek Catholic church, likely because of their fear.

Referring to Putin, he said: “This evil is from him, and we must stop it.”

The strikes came as Biden wrapped up a visit to Poland, where he met Ukraine’s foreign and defense ministers, visited US troops and saw refugees from the war. Before leaving, he delivered a forceful and highly personal condemnation of Russian President Vladimir Putin, saying: “For God’s sake, this man cannot remain in power.”

Kremlin spokesman Dmitry Peskov denounced the remark, saying “It’s not up to the president of the US and not up to the Americans to decide who will remain in power in Russia.”

US officials quickly stressed that Biden was not calling for an immediate change in government in Moscow.

“We do not have a strategy of regime change in Russia, or anywhere else, for that matter,” Secretary of State Antony Blinken said during a visit to Israel. “In this case, as in any case, it’s up to the people of the country in question. It’s up to the Russian people.”

A chemical smell still lingered in the air on Sunday as firefighters in Lviv, about 45 miles (72 kilometers) from the Polish border, trained hoses on flames and black smoke pouring from oil storage tanks hit in the Russian attack.

A security guard at the site, Yaroslav Prokopiv, said he saw three rockets strike and destroy two oil tanks but no one was hurt.

“The third strike threw me to the ground,” he said.

Russia’s back-to-back airstrikes shook the city that has become a haven for an estimated 200,000 people who have fled bombarded towns and cities. Lviv, which has largely been spared bombardment, also has been a way-station for most of the 3.8 million refugees have left Ukraine since Russia invaded on Feb. 24.

In the dim, crowded bomb shelter under an apartment block a short way from the first blast site, Olana Ukrainets, a 34-year-old IT professional, said she couldn’t believe she had to hide again after fleeing from the northeastern city of Kharkiv, one of the most bombarded cities of the war.

“We were on one side of the street and saw it on the other side,” she said. “We saw fire. I said to my friend, ‘What’s this?’ Then we heard the sound of an explosion and glass breaking..”

In his video address, Zelenskyy angrily warned Moscow that it was sowing a deep hatred for Russia among the Ukrainian people, as constant artillery barrages and aerial bombings are reducing cities to rubble, killing civilians and driving others into shelters, leaving them to scrounge for food and water to survive.

A nuclear research facility in Kharkiv, Ukraine’s second-largest city, again came under fire Saturday. Ukraine’s nuclear watchdog said that because of ongoing hostilities it was impossible to assess the extent of the damage.

Kharkiv, which is close to the Russian border, has been besieged by Russian forces since the start of the invasion and has come under repeated shelling that has hit residential buildings and critical infrastructure.

Ukrainian authorities have previously reported that Russian shelling had damaged buildings at the facility, but there had been no release of radiation. The International Atomic Energy Agency has said the nuclear material in the facility is always subcritical and the inventory of radioactive material is very low, reducing the risks of radiation release.

Along with the 3.8 million people who have fled Ukraine, the invasion has driven more than 10 million people from their homes, almost a quarter of Ukraine’s population. Thousands of civilians are believed to have been killed.

Disruption caused by the conflict, and the West’s far-reaching sanctions on Russia, has also driven up food and energy prices around the world. Kristalina Georgieva, managing director of the International Monetary Fund, warned that the burden would be borne by the poorest — and that, in turn, could spark unrest.

“When prices jump, and poor people cannot feed their families, they will be on the streets,” she said. “One thing we know about trouble in one place, it travels, it doesn’t stay there.”

Andrea Rosa in Kharkiv; Nebi Qena in Kyiv; Cara Anna in Lviv and Associated Press journalists around the world contributed to this report.

Follow the AP’s coverage of the war at https://apnews.com/hub/russia-ukraine