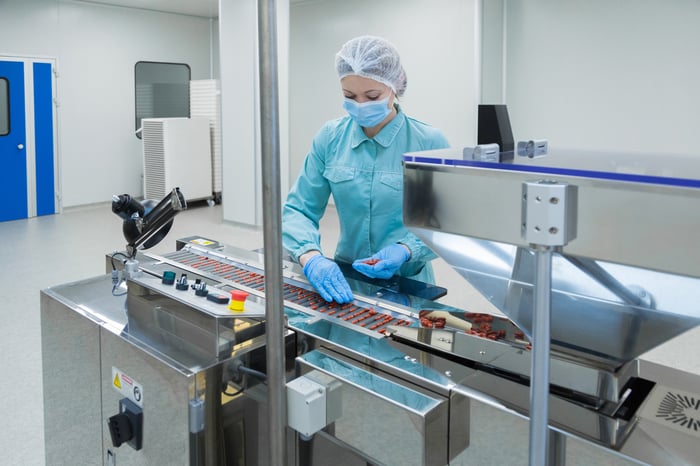 The company released its first-quarter earnings before the market opened on Friday, and while most of the numbers were fairly positive, there were certain trends that may have bothered investors. The good news is the company reported revenue of $13.54 billion, up 4.1% year over year, and earnings per share (EPS) of $2.51, compared to EPS of $1.99 in the same period a year ago. The bad news was AbbVie reported lower sales of cancer drug Imbruvica and immunology stalwart Humira, thanks to competition from newer therapies. The company also lowered its annual EPS guidance from the range of $14 to $14.20 down to the range of $13.92 to $14.12, to reflect costs from various acquisitions, research and development collaborations, licensing arrangements, and milestone payments that began showing up in the first quarter .

Humira was still the company’s biggest seller with $4.7 billion in revenue, but its sales were down 2% year over year. This wasn’t a big shocker as the drug is already facing biosimilar competition in Europe. The drop in Imbruvica’s revenue was a different matter. AbbVie reported $1.1 billion in sales for the drug, down 7.4%.

Skyrizi and Rinvoq are both immunology drugs and they are showing that they could easily make up for any lost sales for Humira. Skyrizi brought in $940 million in revenue in the quarter, up 63.7% year over year, while Rinvoq, which just got a label expansion from the Food and Drug Administration to treat adults with ulcerative colitis who have had an poor response to one or more tumor necrosis factor blockers, brought in $465 million, up 53.6% over the same period last year. Blood cancer drug Venclexta had a reported $473 million in revenue, up 16.9% year over year.

While several major indexes are down so far this year, AbbVie’s shares are up more than 6%, even with Thursday’s drop. Long-term investors see the value in the stock as it has a strong portfolio and an outsize pipeline it is investing heavily in. It also raised its dividend by 8.5% this year to $1.41 a share, the 50th consecutive year the Dividend King has increased its dividend. At its current price, it offers a yield of 3.84%, rewarding longtime investors. The lower share price, to me, makes the stock even more attractive, as with a price-to-earnings ratio of 24.13, it is less expensive compared to many other pharmaceutical companies.